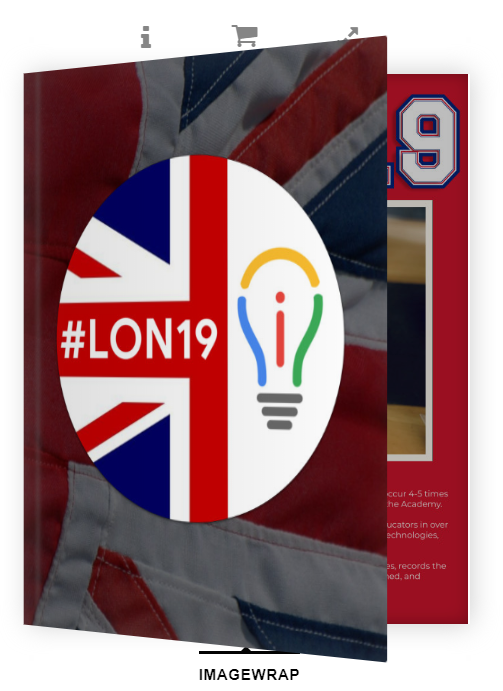 After weeks of hard work, the #LON19 Google Innovator Academy Yearbook is done! Technically, the yearbook was finished on August 11, but I wanted the newly minted Innovators to proofread their memory book and I started a new school year.

So what have I learned? What ideas were reinforced?

Collaboration makes yearbook creation so much easier! This idea was reinforced by the #LON19 Yearbook team. We worked from three different continents - North America, Europe, and South America - to complete the project. Using Google Apps allows us to work from different time zones.

My junior high school students have created their yearbook in Google Apps since 2014. Last year's memory book had 136 pages designed by a well-trained student staff. The student portraits' section was coded; however, the images on the remaining 125 pages were hand-inserted.

The goal of the #LON19 yearbook was to streamline and code the process. Joe Schmidt is the organization and spreadsheet king. His use of unique and filter array formulas made photo organization smooth.

A Google Form like this one is the best way to manage photo and caption submissions. However, getting users to submit images via the Google Form is like pulling teeth. There were 36 super busy Innovators but only 10 of them submitted photos. It is hard to slow down and submit.

Using Google Photos was fabulous! Dave Leonard from Great Britain and Hans Tullman who lives 15 minutes from me, helped tag the photos in the album. These tags helped me add facial recognition in my account. Labeling faces (facial recognition) is not shared between accounts but info tags are shared.

Labeling names cannot be shared with other users.

Info tags are shared with other users.

The easiest way to compile photos and captions was with Twitter Archiver. Writing a tweet is much easier and public. The tweets capture what is happening at that moment. Turns out there are social media photo books that people can create using their Twitter, Facebook, and Instagram posts. Is it ethical to steal photos off the internet without consent? No. I don't believe it is ethical. Consent was granted by #LON19 Innovators who have been a part of this process since June. Using their tweets saved the Innovators a step.

If you read previous blog posts about the #LON19 SlidesYearbook, you may recall the name Clay Smith. I am now his official Google Innovator Mentor for the year, but in all honesty, we teach each other.

SlidesYearbook has two major sections - portraits and everything else. The coding that I designed for pushing the portraits section to Google Slides is strong. I even know how to bypass Autocrat, which can get complicated. However, Clay's Photos to Slides is a better choice for the rest of the yearbook. Theoretically, we can even bypass Google Photos and use Google Drive instead. Drive is better for protecting student privacy. As we learned with the #LON19 SlidesYearbook, together we are stronger.

When will the code be done? Possibly soon. 59 Days of Code begins in just a few weeks. This year's competition is open to Central California residents. That's me. Will I win? Half of me says who cares? I get to code for 59 days with my local coding community. Notice I said half of me. Wish me luck!

Creating the yearbook with educators from three different continents was amazing! The yearbook took too long to create but the results were worth it. Check out the yearbook here and judge for yourself.